Due To Special Circumstances

A place where I jot down my musings on art, life, politics, philosophy and culture.

The 70's documentary The Life And Times Of Harvey Milk still stands as one of the greatest documentaries in the history of cinema, but the true story has never been adapted into a movie. I'm intensely interested in seeing how Van Sant pulls this somewhat conventional narrative off after finishing his more esoteric projects.
For those who don't know, Harvey Milk was the first openly homosexual man to run for public office, who was assassinated by Dan White, the city supervisor. It's an amazing and heartbreaking story and we'll have to see if Van Sant can pull it off. I'm betting an emphatic yes.
Trailer: http://www.apple.com/trailers/focus_features/milk/
Synecdoche New York
Directed by Charlie Kaufman
USA

Phillip Seymour Hoffman plays Caden Cotard, a depressive theatre director losing his automatic body functions (breathing, heart rate etc) who mounts his most ambitious project yet. Determined to make an epic about the painful mediocrity of everyday life, he stages a production inside a gigantic warehouse, building a mock-up New York and casting thousands to live out the narrative threads he assigns them. The play spirals out of control and the years begin to fall away and Caden must come to terms with not only the final outcome of his masterpiece, but the overall direction of his life and humanity.
Of course you all know Charlie Kaufman for his screenplays for films such as Eternal Sunshine Of The Spotless Mind, Being John Malkovitch and Adaptation. Now we finally get to see what his directing chops are like. Will he be a superb success, like Coppola and Kurosawa before him? Or will his lack of experience in creatively managing the somewhat more industrial process of film-making produce a massive failure? One way or another this movie looks fascinating. The broad outline is wonderfully bizzare, the cast is first rate and the cinematography is by legend Frederic Elmes, the man who shot Eraserhead and The Ice Storm.
Trailer: http://www.apple.com/trailers/sony/synecdochenewyork/
Ballast
Directed by Lance Hammer
USA

Bela Tarr comes to America! Well maybe not, but the Hungarian director's stylistic fingerprints are all over this feature debut by Lance Hammer, which is a quiet and haunting picture about people attempting to piece together their lives after trauma. I have to say the cinematography looks great and the rhythm of the trailer is somewhat seductive. Lets see if it ever gets Australian release.
Trailer: http://www.apple.com/trailers/independent/ballast/
Sukiyaki Western Django
Directed by Takeshi Miike
Japan

Try and look past Quentin Tarantino's grating presence and consider just how amazingly crazy this movie could be. A western, filmed by Takeshi Miike (The Happiness of the Katakuris, Visitor Q, Dead or Alive, Audition, Ichi the Killer etc etc etc), where the weapons are entirely era inappropriate and everyone speaks phonetic English. It could be the greatest thing ever.
The plot is meaningless. The action is all. Embrace the weirdness.
Trailer: http://www.apple.com/trailers/independent/sukiyakiwesterndjango/
Let The Right One Come In
Directed by Tomas Alfredson
Sweden

Coming off the back of the Texas Fantastic Fest with major awards and stellar reviews. Let The Right One Come In is Sweden's answer to all the simpering and neutered vampire fiction out there. It almost plays as a bizzaro version of the insanely popular female romantic fantasy series Twilight, with a young (seriously young) boy falling in love with an ancient vampire who looks like a little girl. This is horror played straight and all indications are that it's one that doesn't shy away from the ugly side of being a creature of the night. Despite appearances, vampires are not human. The film has already been slated for an American remake but I can't see why beyond the idiocy of the commercial marketplace. The production values look great. Highly recommended.
http://www.apple.com/trailers/magnolia/lettherightonein/
Sad Dream
Directed By Kim Ki-Duk
South Korea 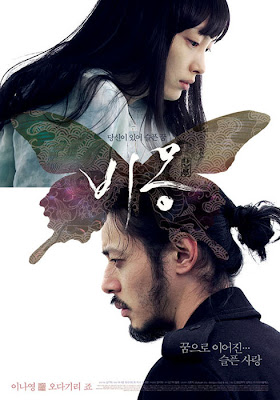 Kim Ki-Duk is one of the great minimalist masters out there at the moment and after 3-Iron I'm prepared to go anywhere with him. I'll admit that I haven't seen his two latest efforts, but this new film looks some kind of incredible. A man discovers that an unknown woman is sleepwalking his dreams every night. Good stuff.
Waltz With Bashir
Directed by Air Folman
Israel

A surreal and visually dazzling exploration of war, guilt and memory, Waltz With Bashir utilises it's animation not just as a gimmicky portrayal of dreamstate, ala Waking Life, but actively explores the more emphatic tropes the style has to offer. It tells the story of an ex soldier from Israel who is haunted by his inability to remember his actions during the Lebanon War, in the form of violent dreams. He seeks out and interviews other soldiers and, from their testimonies, slowly re-creates his own experiences. There has been a strong push for more "adult" animation during the last five years or so. Let's hope it's a trend that continues.
Trailer: http://www.apple.com/trailers/sony/waltzwithbashir/
The Good, The Bad and The Weird
Directed by Kim Ji-Woon
South Korea

This is getting slightly ridiculous. I can't believe how many westerns Asia is pumping out at the moment. Noodle Westerns are in apparently. Anyway, this is another film which did gangbusters at the Fantastic Fest. It won the audience award so you know it's at least got to be a damned good time.
Essentially a remake of Sergio Leone's original classic, TGTBTW twists the bizarreness level up to eleven with explosions, iconic dialogue and amazing action set-pieces aplenty. Well worth your interest. Keep an eye out for it.
The Soloist
Directed by Joe Wright
UK/USA So far Joe Wright has shown himself to be an intensely focused and technically accomplished director who can pull great performances out of his cast in the service of classic adaptations with features such as Atonement and Pride and Prejudice. I kind of hate how he abuses Bach's most overplayed Cello Suite in the trailer, but there's no denying this looks to be an impressive and no doubt Oscar-hopeful feature. God bless the resurrection of Robert Downey Jr's career.
The film tells the story of an intensely gifted musician who also happens to be schizophrenic and the journalist who discovers him and crusades to get him the help and recognition he deserves.
Trailer: http://www.apple.com/trailers/paramount/thesoloist/
Fear[s] of the Dark
Directed by Blutch, Charles Burns, Marie Caillou, Pierre Di Sciullo, Lorenzo Mattotti and Richard McGuire
France

Another fascinating exporation of the vast potential animation has to offer the cinematic world. This series of shorts exploring the notion of fear and horror has been given intensely positive reviews and is sure to cast a bit more light onto the criminally unheard of careers of graphic masters such as Lorenzo Mattotti.
Trailer: http://www.apple.com/trailers/independent/fearsofthedark/
Martyrs
Directed by Pascal Laugier
France

Another entry into the growing genre of New French Horror. This is a film which has gotten a lot of good press and has generated waves of controversy reagrding it's content. I don't want to go too much into it as the surprise and "fun" of the film develops from it's plot twists. Suffice to say, very bad things happen and people go very very crazy.
Revolutionary Road
Directed by Sam Mendes
USA

I'm both excited and horrified by the notion of this movie being made. Richard Yates' novel is something which has stayed with me since I first read it five years ago. It not only enormously shaped my view of the contemporary world, but gave voice to a lot of the gnawing existential problems that I felt lying under the surface of a lot of things. That someone has the audacity to take what is essentially a book that lives purely on the vibrant strength of Yates' narrative voice and transpose it into action without comment is a scary, yet intriguing notion. We'll see how it pans out. Mendes has shown he can do suburban angst well with American Beauty, but whether he can handle something as complex and beautiful as the lonliness of the human soul is something else entirely.
Trailer: http://movies.yahoo.com/premieres/9951304/standardformat/
Posted by Timothy John Sharp at 2:04 AM

I saw the film a few nights ago and I thought it was pretty good.

Another film that seems to be exploring similar themes that are present in my life at times.

I thought both performances were good however it very "Acted" byt that I mean no space for simply thinking the thoughts, everything was shown with volume and full body expressions - at the same time though I guess that does suit the time period....