Due To Special Circumstances

A place where I jot down my musings on art, life, politics, philosophy and culture.

Let's get right to it. Apologies in advance for the lack of recognizable US productions in this update but there honestly hasn't been anything I thought was worth a mention hitting the press these past two months, it's been pretty quiet on the movie front altogether to be honest but there have been a few promising efforts that have surfaced.
Stingray Sam
Directed by Cory McAbee
Canada

Oh God YES! For you poor unfortunates who haven't seen McAbee's amazing The American Astronaut, stop reading this and go hunt down a copy asap. It's a truly wonderful indie flick with the quirk turned up to 11 and some great characterization. This new miniseries is a crazy cowboy space musical western. A serialized telling of the adventures of Stingray Sam and the Quasar Kid as they attempt to rescue a girl who is kidnapped by a genetically mutated intergalactic spaceboss. Well worth your time.
The Inhabited Island
Directed by Fyodor Bondarchuk
Russia

I'm not going to lie to you, I have next to no idea what is going on in this trailer, but the film is the biggest budget thing Russia has ever produced and has some amazing production values. I'll grant that the lead actor looks pretty uninteresting but the film is adapted from a story by the Strugatsky brothers, who also wrote Stalker. Bondarchuk is a master at delivering stunning imagery and thrilling action, whether he's any good at actual plot is another matter.
Red Cliff 1 and 2
Directed by John Woo
China

God I want to have both halves of this right now, but sadly I must wait until the DVD of part one gets imported before I can sample this expensive expensive movie. Let it just be said that this is a cinematic adaptation of part of the War Of The Three Kingdoms. No Lu Bu sadly... But plenty of Tony Leung.
Here's a taste of Part 2.
Original
Directed by Antonio Tublén And Alexander Brøndsted
Denmark

An off-kilter debut comedy by this duo which seems to owe a lot to Wes Anderson and the Coen Brothers. It deals with the misadventures of a loser who seeks to change his life by a move to Spain from dreary Denmark. First, however, he must deal with his insane mother and the violent attention of a femnazi, as well as come to terms with some truly weird hidden truths about his friends and family.
El Juego Del Ahorcado
Directed by Manuel Gómez Pereira
Spain 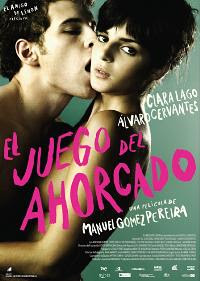 From the genius who gave us the unparalleled Pusher trilogy comes this fascination exercise in biographical magic realism. Tom Hardy (Heathcliffe in the recent Wuthering Heights TV movie) gives a dynamite performance as Charlie Bronson, a man who considered himself an artist, his craft being violence. This is less a wholly accurate retelling of this notorious man's life, than it is a surreal exploration of performance, fame, insanity, theatre and vanity. It looks fantastic.
Medicine For Melancholy
Directed by Barry Jenkins
USA

A sweet little movie about the fuzzy in between zone between one night stands and commitment, comfortable living and compromised lives as well as urban isolation and the outsider's perspective of being in a vast minority. It stars Wyatt from the Daily Show so make of that what you will. I think it looks fun.
Trailer: http://www.apple.com/trailers/independent/medicineformelancholy/
Tokyo Sonata
Directed by Kiyoshi Kurosawa
Japan

One of the great unsung talents of the Japanese film scene, Kurosawa (no relation to Akira), has always been an auteur who has made horror films which are more about human relationships than things that go bump. Now he's got a shot at a more conventional drama about a family on the verge of implosion. The music is by none other than Kasumasa Hashimoto, one of the leading artists in Japan's amazing experimental music scene and one of my personal favourites.
Trailer: http://www.apple.com/trailers/independent/tokyosonata/
Adventureland
Directed by Greg Mottola
USA

A goofy comedy set in an amusement park in the 80's starring key players from both Superbad and Hot Rod and written by the guy behind the former movie. It's stupid but hopefully it's hilarious. Plus Kristen Stewart has suddenly become unfathomably attractive lately and this movie has her in it so go figure.
http://www.apple.com/trailers/miramax/adventureland/
Adoration
Directed by Atom Egoyan
USA

From the man who gave us The Sweet Hereafter and Aratat is the story of a boy who uses a school assignment to investigate the reasons and facts behind his father and mother's death in a car accident. It's a fusion of multimedia, memory, opinion and emotion, wrapped up in a curious scenario of false identity. I have to admit the lead actor sort of annoys me in this trailer, but I trust Egoyan to yet agan surprise me by his light touch and complex themes.
Trailer: http://www.apple.com/trailers/sony_pictures/adoration/
Wendy and Lucy
Directed by Kelly Reichart
USA

This is a movie which has come into a lot of critic's top ten lists and seems unusually prescient given the current economic situation. Wendy and Lucy is the story of a young woman (Michelle Williams) and her dog who gets stranded in Oregon and must deal with increasingly difficult cirumstances as her few safety nets collapse. Kelly Reichart made the interesting if flawed little movie Old Joy which and all bets are on this being proof of a director hitting their stride.
Trailer: http://www.apple.com/trailers/independent/wendyandlucy/
Che
Directed by Stephen Soderbergh
USA

I probably should have mentioned this film in earlier blog posts but only recently has a full trailer been released. If ever anyone needed proof of how great the RED Camera truly is, just cop a load of the cinematography in this four hour epic which will be split into two films. Benicio Del Toro has widely been hailed as giving the performance of his life in this immensely ambitious biopic, all produced, directed, written, shot and edited by Soderbergh himself. Talk about auteur!
Trailer: http://www.apple.com/trailers/independent/che/
Gomorrah
Directed by Matteo Garrone
Italy

This movie has recieved thundering approval from all the critics I care about and is regarded as the best mafia film since... well ever. It's a multi-layered look at the realities of organised gangs in Naples and the violent horror that seeps through every pore of life in this city. The reaction from most people upon watching it is apparently almost apocalyptic shock. Garrone is the man behind the brilliant The Taxidermist, one of the best unseen movies around. Check this film out as soon as you can.
Trailer: http://www.apple.com/trailers/independent/gomorrah/
Posted by Timothy John Sharp at 2:19 AM 35 comments: